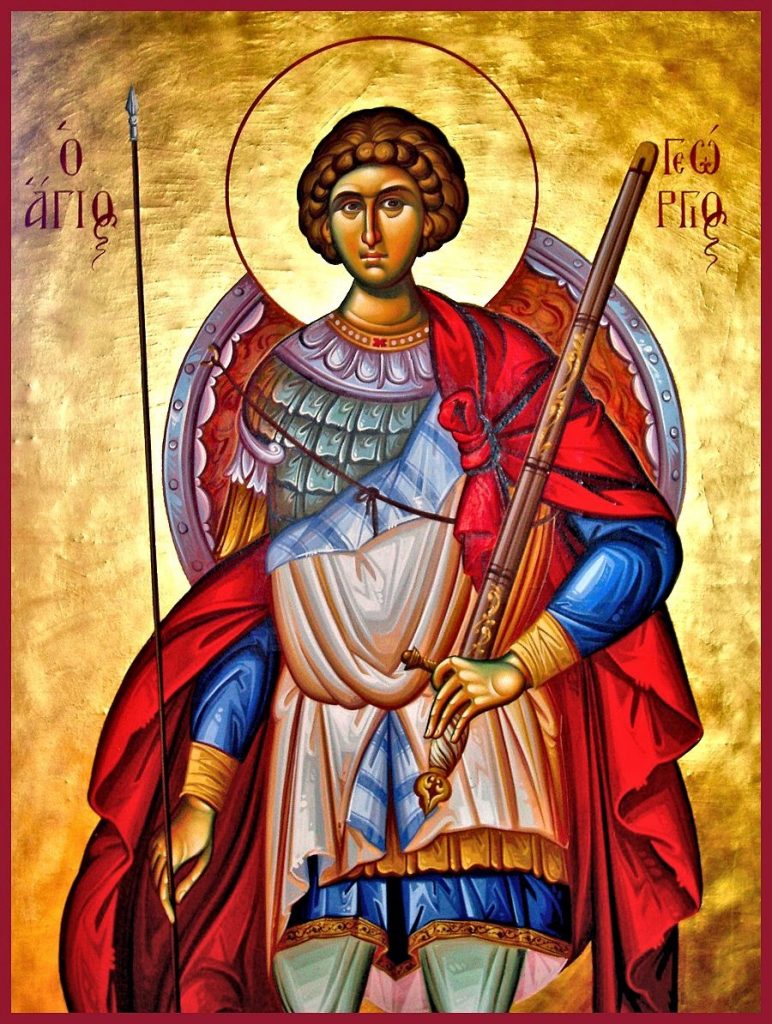 St George with sword, rather than spear and dragon.

St George is the patron saint of England. He is known primarily for slaying a dragon with a spear and most versions of any story of his life one is likely to read will tell how he hailed from the Near East. In Glastonbury we can see to this day, in the High St, a relic of a far stranger variant version that was commemorated here during the medieval era.

George was nobly born in Coventry. His mother died in childbirth and his father Albert was so consumed by grief that he was unable to prevent an enchantress named Kalyb or Calyb (generally a male name) from stealing the baby. George was raised by this woman who gave him armour, a shield, and a horse called Bayard when he came of age. The shield bore no heraldic design as Kalyb did not want him to discover his true identity. He was tasked with finding a sword for himself.

Releasing six other knights from imprisonment by Kalyb, George led the group to Glastonbury. His blank shield immediately attracted attention. A powerful relic had been left there by Joseph of Arimathea. It was a sword named Meribah. Formerly owned by St Peter, it had been used by him in the Garden of Gethsemane to cut off the ear of a man named Malchus in the tumult surrounding the arrest of Jesus. This led to the final healing miracle when the ear was restored on its owner’s head. The pommel of the sword had been made in Glastonbury but the blade was original.

In the typical manner of such tales, a wicked knight had let it be known he intended to take the sword. George faced him in combat using the very sword itself and defeated him but not without receiving a severe shoulder wound. At first, the blood poured in a vertical stripe down his shield. He then fell over sideways as another stripe created the now familiar cross. His subsequent coat of arms and the flag of England itself were determined by this event. It was also clearly seen that the sword Meribah should be his.

The story is full of details that don’t exactly sit well with the historical record. The Abbey is portrayed as an institution broadly in its medieval, or at least Saxon, form. It has an Abbot. This was not the case during the time associated with the life of George. As well as using the holy sword, he jousts with the wicked knight in a decidedly medieval manner unknown during what was still the time of the Roman occupation. 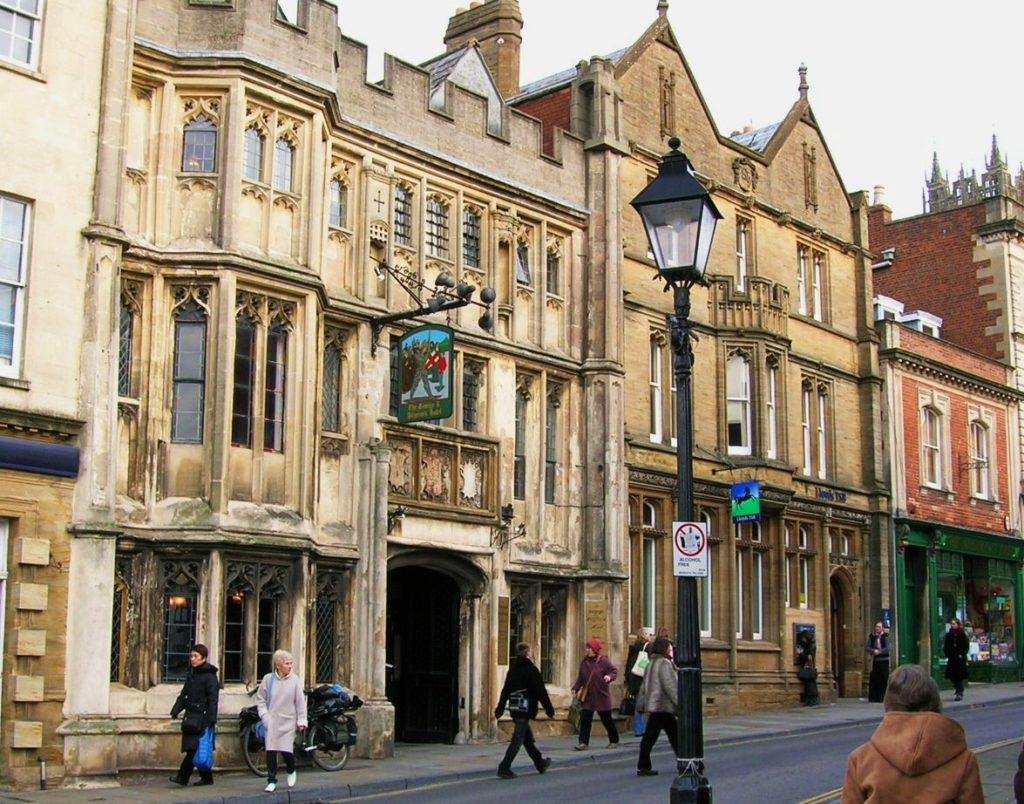 The George and Pilgrim Inn in Glastonbury High St, dating from the later years of the Abbey, was originally just the Pilgrim Inn and only took on the George designation in the nineteenth century. It does provide a glimpse of the strange version of the George story and serves to anchor it and keep it in some sense alive down into the present day. 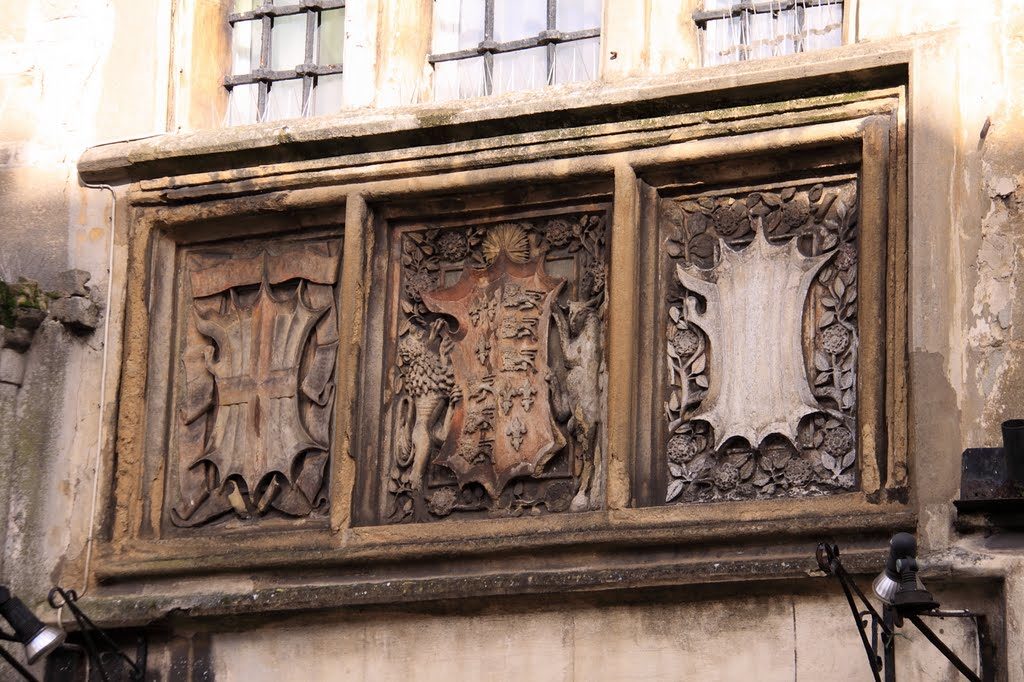 Heraldic devices carved in stone over the entrance date from the time of the construction of the current form of the building, around 1475. The Royal Coat of Arms, the lion and the unicorn, are flanked by a shield with the cross of St George and another with no design at all. The current pub sign shows George not with a spear and dragon but simply his sword. An older version did show the dragon. I prefer to believe that something seeks to preserve the local version of the story.

I love the weird old tales of the saints, regardless of any arguments about their historicity. The Glastonbury George tale tells us that the design of the flag of England itself, that became integrated into the union flag of Britain, was formed by an event in Glastonbury. The mythically inclined can potentially get a lot of mileage from that. As for the idea that George was raised by some kind of witch in the woods who gave him armour, a shield, and a horse, there’s a pagan remodelling of that tale surely waiting to be told.