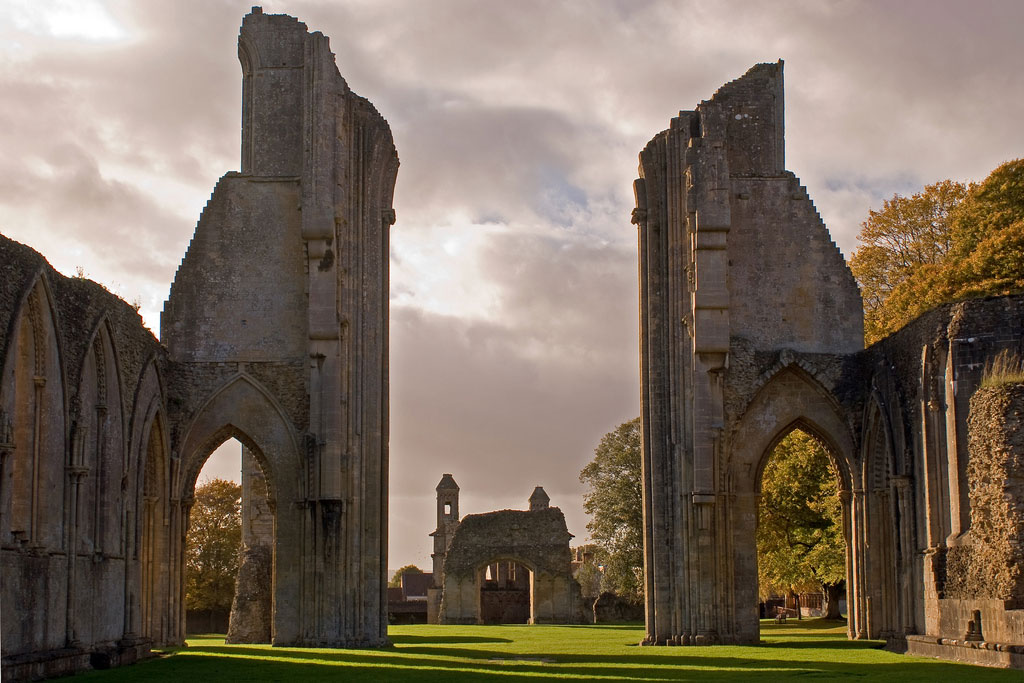 There are few places where history and mythology, beauty and tragedy, dissolution and rebirth, meet so powerfully as in Glastonbury Abbey.

Two great stories associated with the Abbey are forever linked with the charisma of the place and indeed the whole of Glastonbury. These stories have been repeatedly shown to be open to all kinds of criticism but stubbornly resist the debunking, thus demonstrating the power of the combination of myth and landscape.

The first story tells a foundation legend. The earliest church on the site was founded by Joseph of Arimathea, an enigmatic character who appears only briefly in the Bible but in a very important role as it was his tomb that Jesus was placed in after the crucifixion and thereby provided a safe space for the most important event in Christianity, the Resurrection. 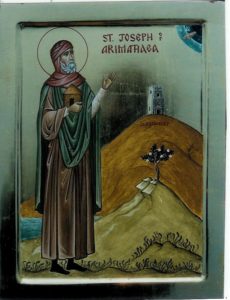 Joseph became an irresistible subject for story tellers. Having witnessed the crucifixion, he had collected some of Christ’s blood from the spear wound in his side. One tale told of him and a group of twelve followers coming to Glastonbury in 63AD and being granted land by the local ruler. A small circular wooden church was built and surrounded by huts.  Unfortunately the earliest forms of this story date from a thousand years later. Volumes of books both for and against this charming story have been written and will continue to be written. 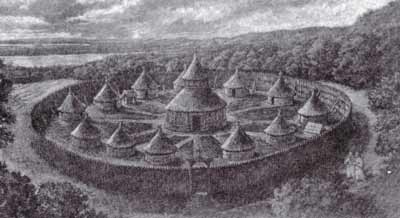 One thing is clear. When the Saxons took control of the area they did find an old church whose aura of sanctity was such that they chose to preserve it and make it the centre of an ecclesiastical site granted considerable status by a royal charter.

A number of important saints are linked with the Abbey during the early days, including the patron saints of Ireland and Wales. Patrick was an Abbot and David made an important visit. 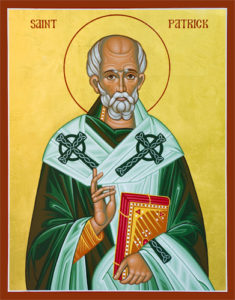 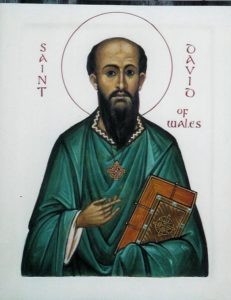 The Abbey’s prestige increased tremendously during Saxon times. Its most famous Abbot, St Dunstan, became Archbishop of Canterbury. Stories associate him with alchemy and  demon-busting. He was assuredly a remarkable man. 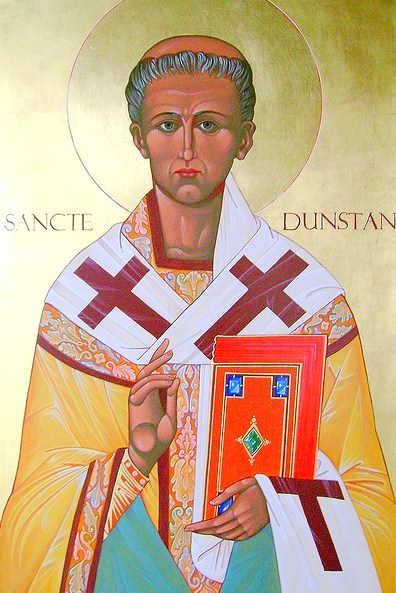 The Norman conquest saw a massive makeover but, once again, the sanctity of the mysterious Old Church left it in place and increasingly revered as a place of pilgrimage.

A disastrous fire in 1184 saw the ancient building destroyed. A new Lady Chapel was built in the exact same place, supposedly to the same geometrical plan, and this served as the generator of the subsequent medieval buildings. This oldest part of the remains is the best preserved. 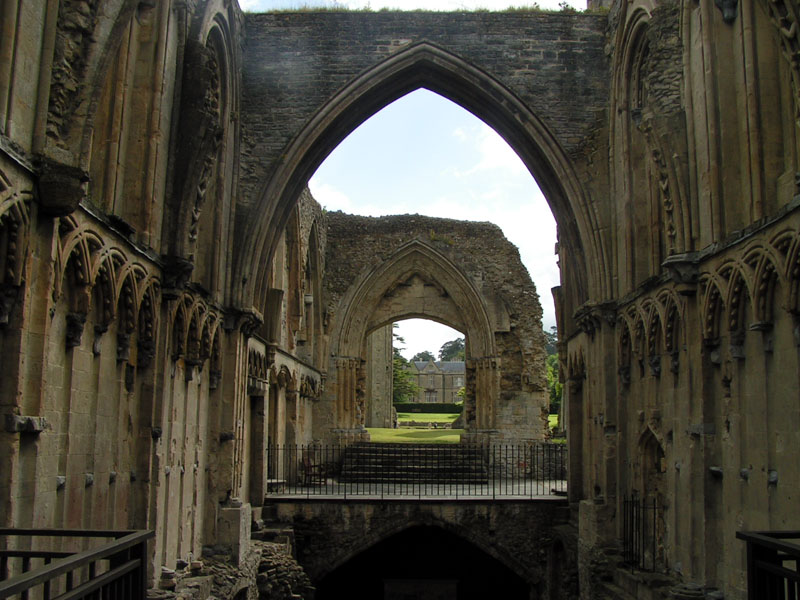 It is at this point that the second great Glastonbury story comes in. During the time of the construction of the new church, the grave of King Arthur and Guinevere was discovered and skeletons recovered. This event continues to generate passionate debate in the present day.  The place from where the bones were excavated is marked by a sign and any tour of the Abbey must take it in.

In later years an elaborate tomb was built in the Choir area of the newly-expanded complex of buildings and the bones inspected during a visit by Edward I.

From that moment Glastonbury became identified with the Isle of Avalon. This is yet another area of disagreement. The discovery of the grave seemed to suggest some sort of logic: there were  stories of  Arthur that said he was laid to rest at Avalon and he’d been found at Glastonbury therefore it must be Avalon. The Celtic traditions of islands of the dead don’t really suggest there was only one of them. The name “Avalon” may well have originally referred to a location other than Glastonbury. What cannot be doubted is that all of the characteristics of Avalon are present in Glastonbury. If it isn’t the original one it probably fits the bill even better. The modern Avalonians would affirm that Glastonbury remains a functional Isle of Avalon to this very day and, beyond the sneering of the debunkers, it is that which is of most importance. 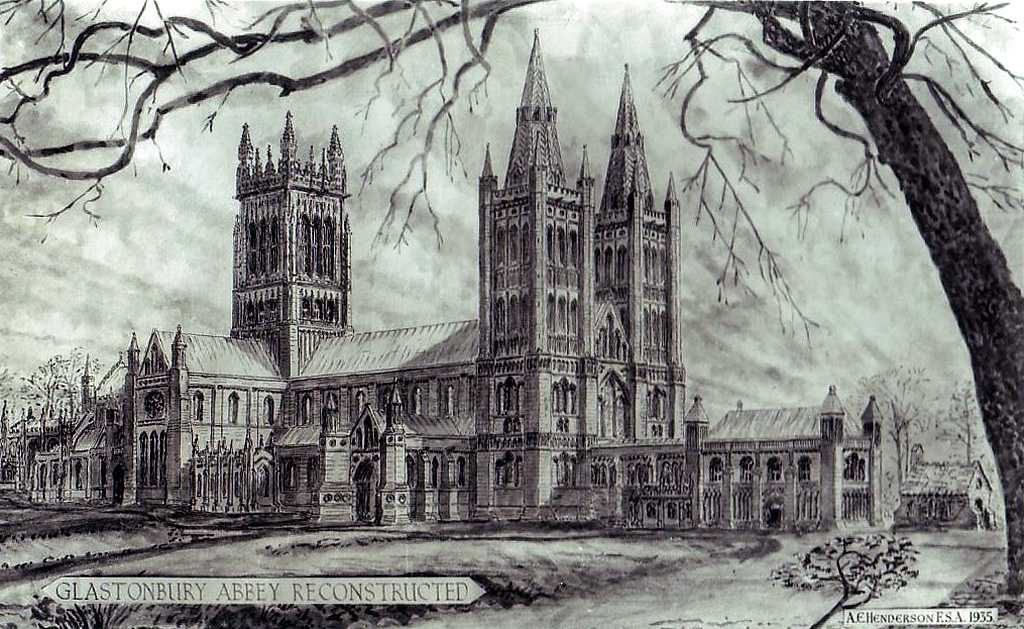 So began a golden age. The Arthurian mythos with its quest for the Grail inspired the whole of Europe. Glastonbury’s fame as his resting place gave it a unique status. The Abbey and its lands were almost an independent state, having been granted unique privileges by successive monarchs. Abbots sought to outdo each other with ever-larger building projects. Apart from old St Pauls in London, it became the longest church in England. The blessings of Our Lady of Glastonbury seemed tangible. All of this endured until the time of Henry VIII. 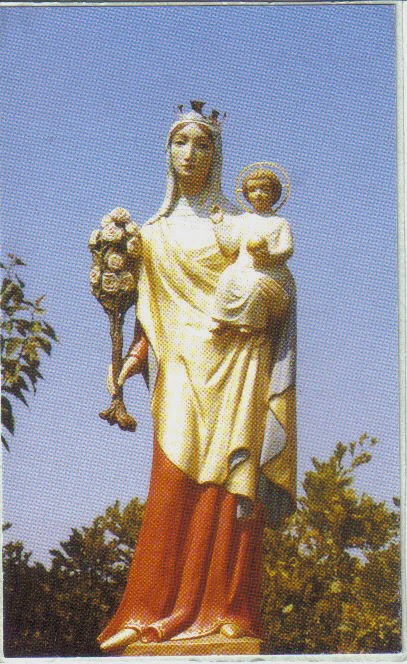 Statue of Our Lady of Glastonbury from Catholic Church based on depiction in medieval Abbey seal.

Henry perpetrated perhaps the greatest British cultural atrocity. His Dissolution of the Monasteries was carried out in a needlessly wanton manner. What happened at Glastonbury in November 1539 was the worst example of the entire process. The elderly abbot, Richard Whiting, was set up on a blatantly false charge of treason. Along with two colleagues, he was sentenced to death. The old man was stretched and tied on a hurdle. This was dragged by a horse through the town, past the Abbey, and up to the summit of the Tor, where gallows had been erected. There the three men were executed. Whiting’s head was removed and placed above the Abbey gate. The rest of his body was cut into four pieces that were displayed in nearby towns.

The contents of the Abbey library were not carefully relocated. Pages of priceless manuscripts were found as litter in the streets. The bones displayed as Arthur and Guenevere’s were lost. Who knows what modern forensic science could have told us if they were still available? The monks were dispersed. Before long the majestic edifice of the building was pillaged for raw material. One of its later owners used explosives to blow great holes in the walls to satisfy his materialistic priorities. A number of locals did rather well from the process. The Grail Chalice of British Christendom disappeared, leaving a wasteland behind. For hundreds of years Glastonbury seemed to go into a kind of suspended animation. Such was the death that preceded the rebirth. 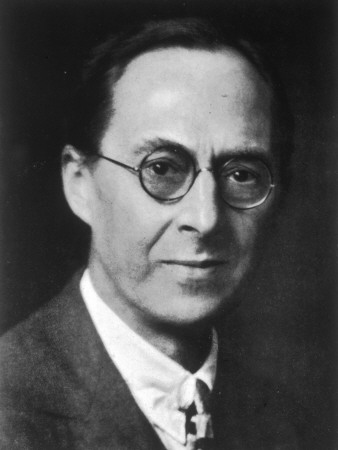 At the beginning of the twentieth century the Abbey ruins were put up for auction and passed into the hands of the Church of England. In 1908 a Bristol architect named Frederick Bligh Bond was placed in charge of archaeological excavations there. He quickly achieved notable results. A chapel mentioned in records but physically lost was located. Further good work followed. Boosted by his success, Bond revealed his unorthodox methodology. Automatic writing was used to contact the collective intelligence of the departed monks, who referred to themselves as the “Company of Avalon”. The very first message had said that ‘All knowledge is eternal and is available to mental sympathy.’ He recorded the whole process in two books, The Gate of Remembrance in 1918, and The Company of Avalon in 1924. 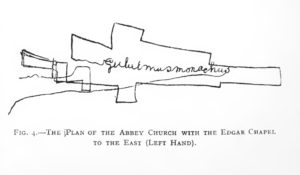 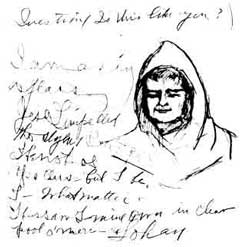 Bond carefully studied the architectural form of the Abbey. It was he who first suggested that numerical codes, suggestive of esoteric ideas, were embodied in the geometry of its design. This inspired sixties visionary John Michell to state that the Biblical New Jerusalem was the template here. Bond’s work is controversial and was never fully endorsed by archaeologists and he was eventually removed from his post.

A number of drawings from his work are very evocative of the time of the Abbey just before the Dissolution. Contemplation of them is a nice preparation for a visit. 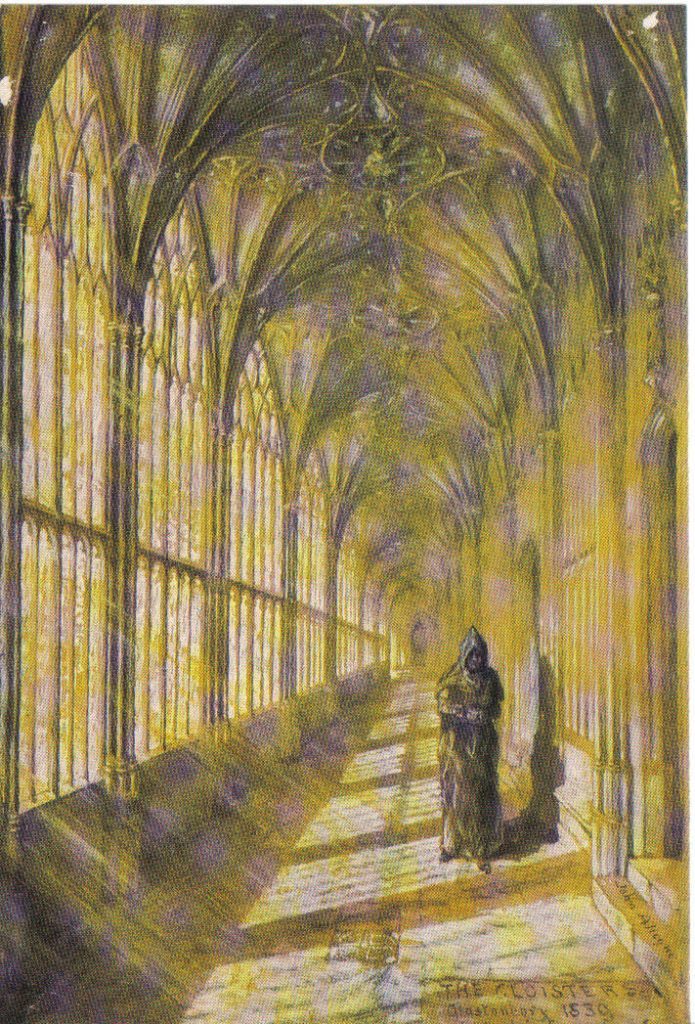 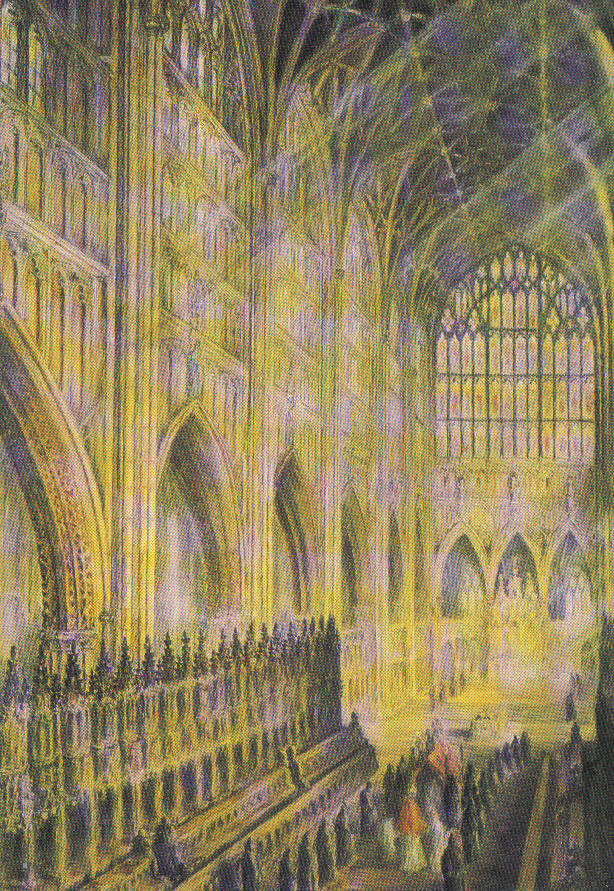 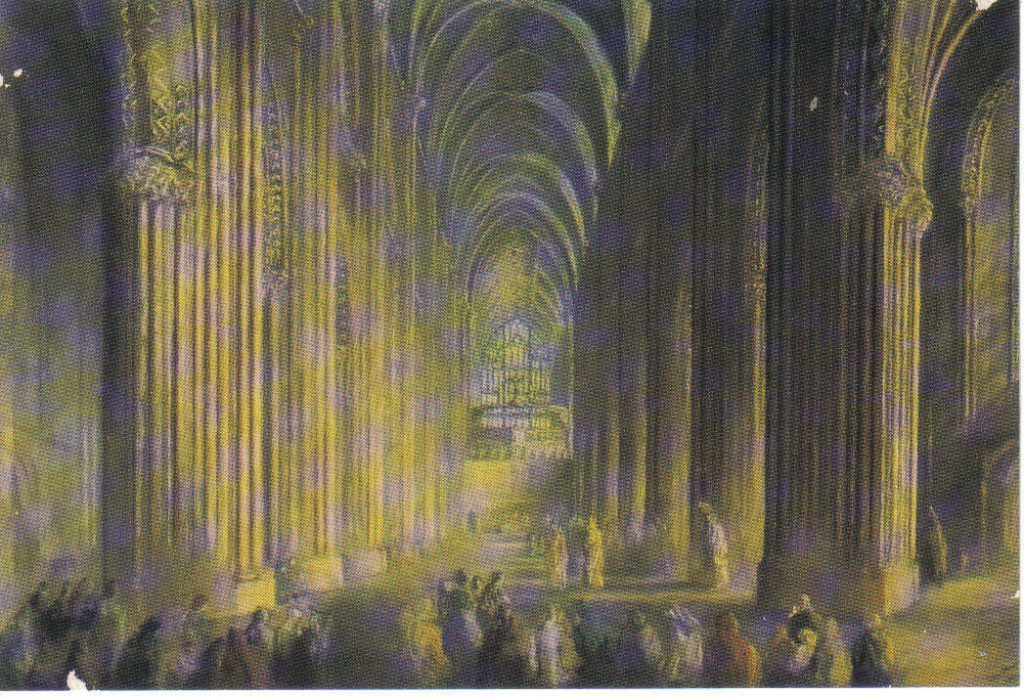 This extraordinary episode heralded the rebirth of Glastonbury. For those willing to consider such possibilities, the dynamic appeared to come from the invisible realms, from spiritual forces linked with the mysteries of Arthur and the Grail, Joseph of Arimathea and a whole host of saints. It gave hope that eventually, the horrors perpetrated by Henry VIII could one day be annulled and transcended. It all affirms that Glastonbury is alive and that the inspiration that sustained the Abbey is still available.

This large painting in the Abbey Museum entrance area can be a good place to begin communion with the Company of Avalon monks before entering into their realm. 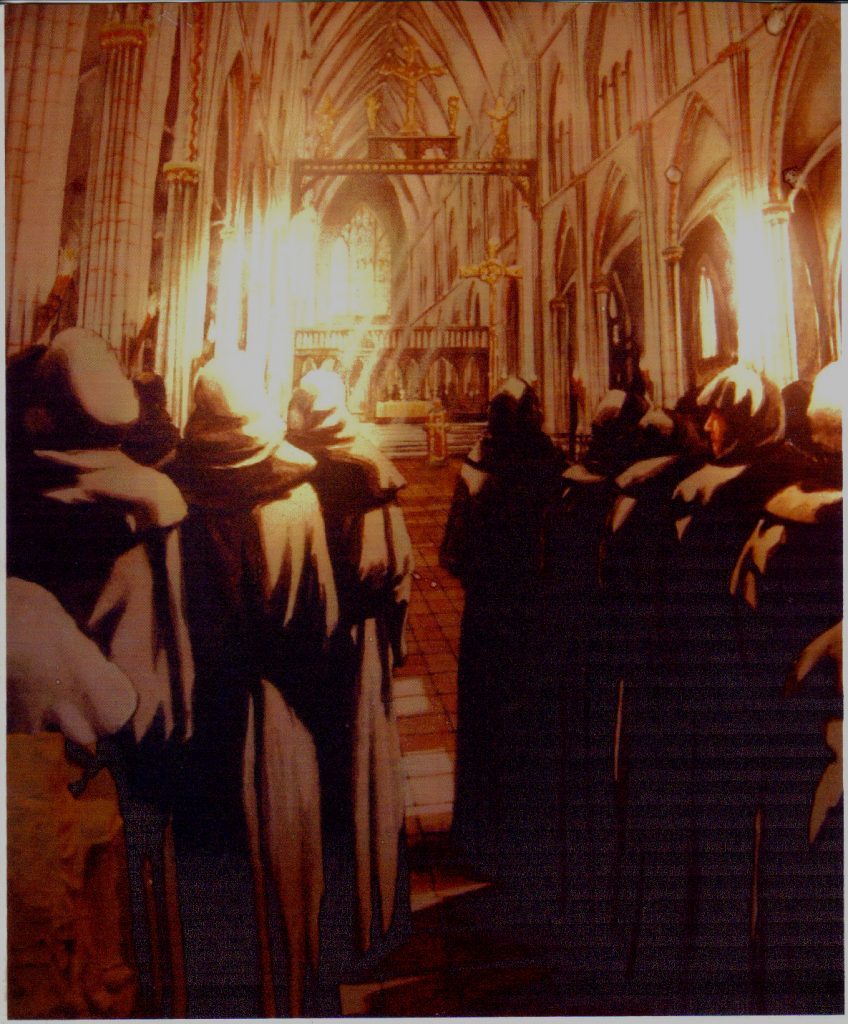 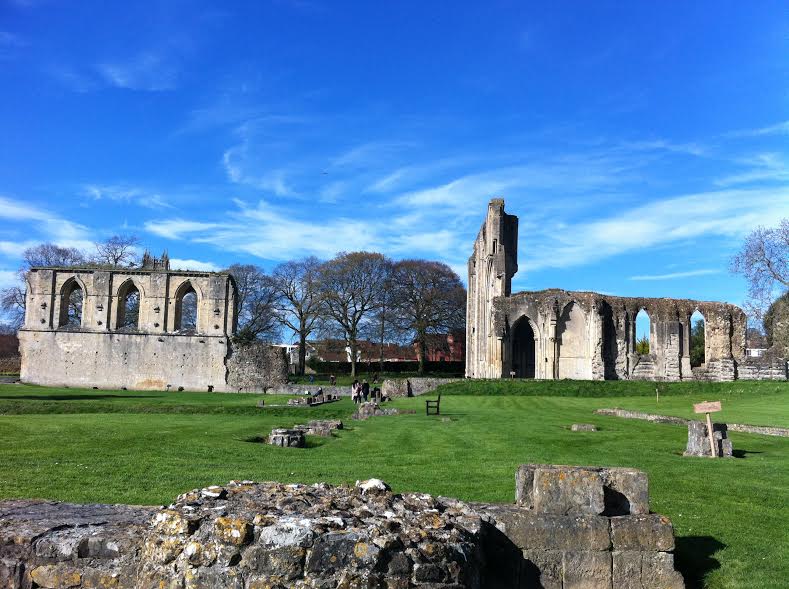