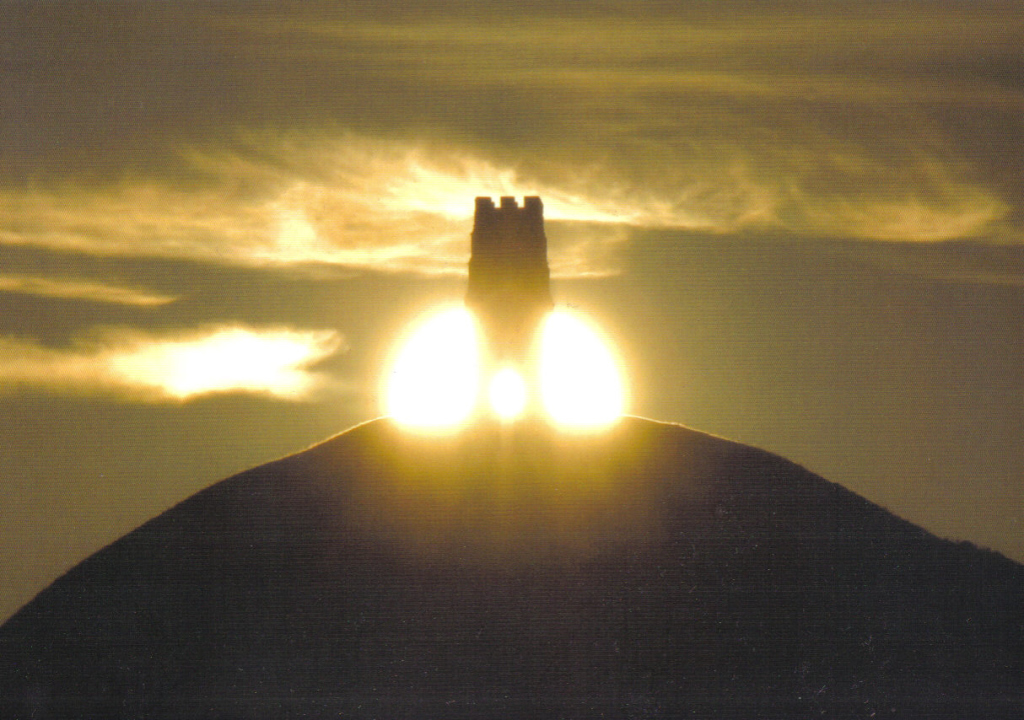 Glastonbury Tor, with its ruined tower of a church dedicated to St Michael, is one of the most iconic mystical locations in Britain. It reaches a height of 518 feet above sea level.  Although showing signs of human shaping it is primarily a natural product of long-term geological forces. Most of the hill is made of sandstone. It may be that within this water-bearing permeable rock is created an ongoing source for the adjacent Chalice Well although this is debatable. It has been suggested that this combination of sandstone and its watery mineral-rich interior, in company with the shape of the hill, has an effect on human consciousness, that a spiraling energy ebbs and flows around it. Some claim to be able to feel this force on the Tor.

Many have felt that the strangely shaped hill has charisma, a personality of some kind. What was it that attracted people to Glastonbury in the past? The most fundamental thing seems to be a mysterious quality of the landscape itself. For example, the Tor can be seen from a considerable distance away. It totally dominates the visual field. As one approaches it and circles around it, a continual shape-shifting is occurring. It presents a different aspect from every vantage point. And yet, there are places in the town where the Tor cannot be seen. The view from its summit is extensive but does not include the Abbey, which is hidden by Chalice Hill, apart from the late addition of the Abbot’s Kitchen. The tower, which is clearly visible from miles away, doesn’t really seem that tall when you’re inside it. 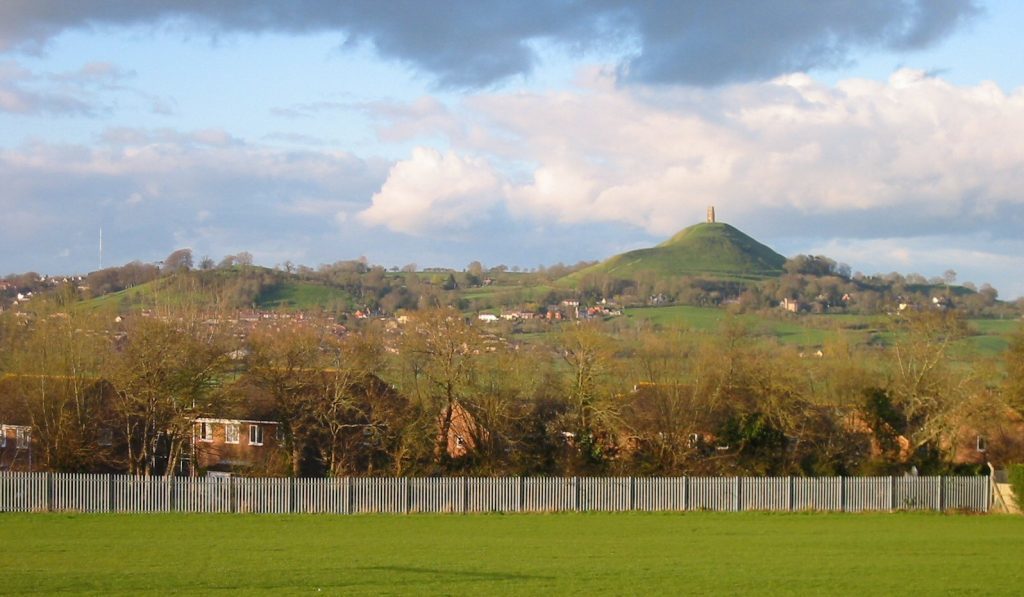 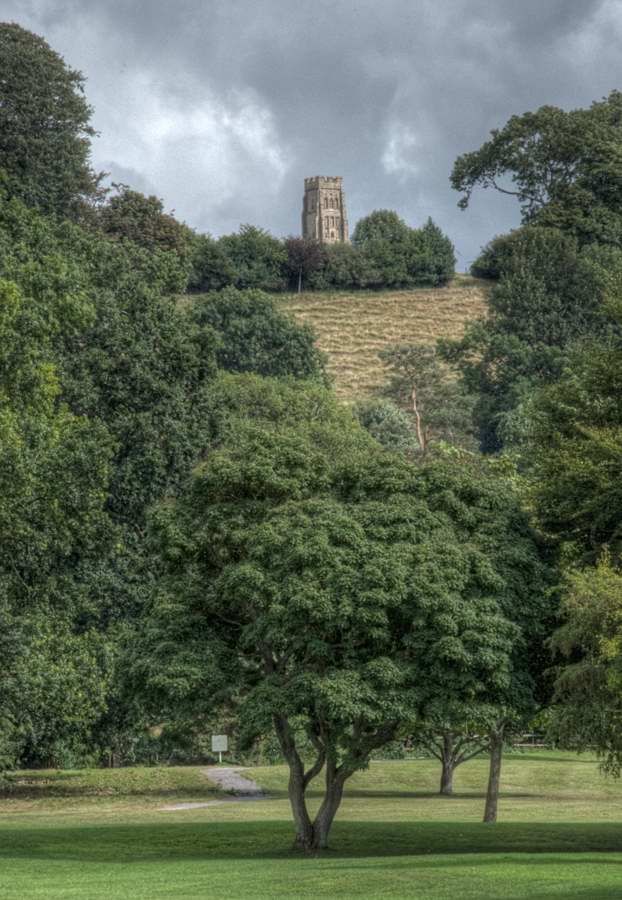 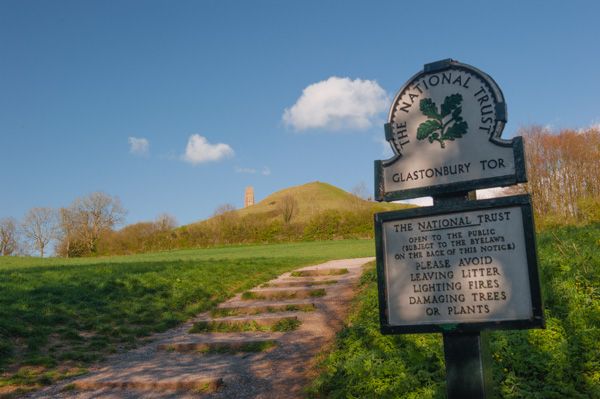 The early inhabitants of Britain led lives far more intimately connected to the land than most people do today. The distinctive qualities of the Glastonbury environs would suggest it was a place of the Otherworld. In those far-off times much of the area was underwater as well. The Tor and its adjoining hills would have been virtually islands. Despite subsequent draining much of the spell remains intact. The whole locale seems to participate in an endlessly shifting perspective. 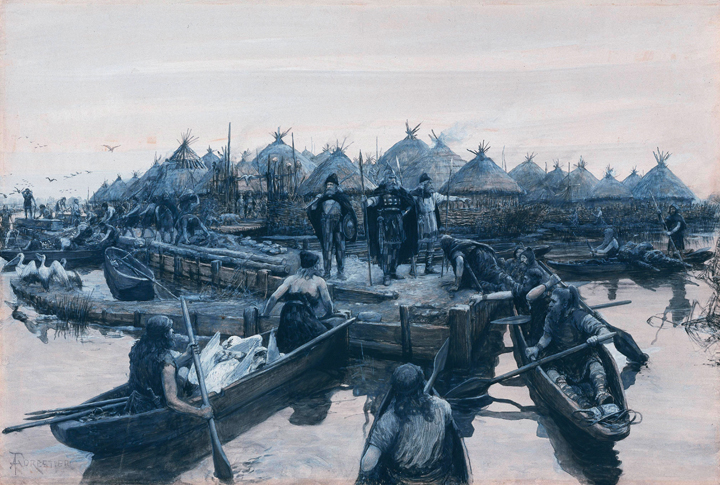 Christian material from the Dark Age period contains some tantalising hints about the place’s sanctity and the sort of beliefs surrounding it. St Collen was summoned to pay his respects to Gwyn ap Nudd, who is Lord of the Tor, King of the Faeries and ruler of the underworld known as Annwn Atop the Tor, Collen somehow enters Gwyn’s otherwordly castle where a feast is in progress and music and beauty are all around. Not being much of a party person, Collen splashes holy water everywhere and the whole scene disappears like a mirage. 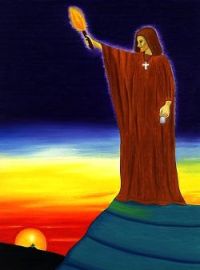 Archaeology has shown that a monastic community was situated on the Tor in Saxon times during the period that the Abbey rose to prominence. 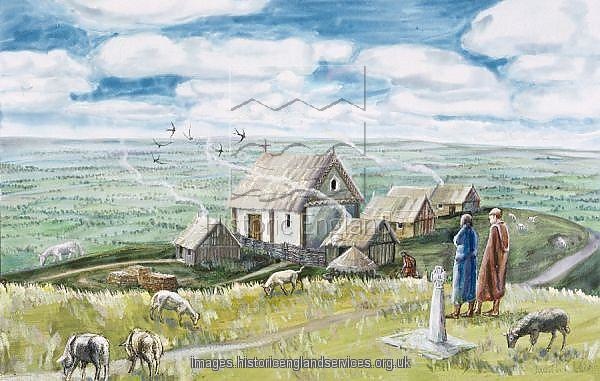 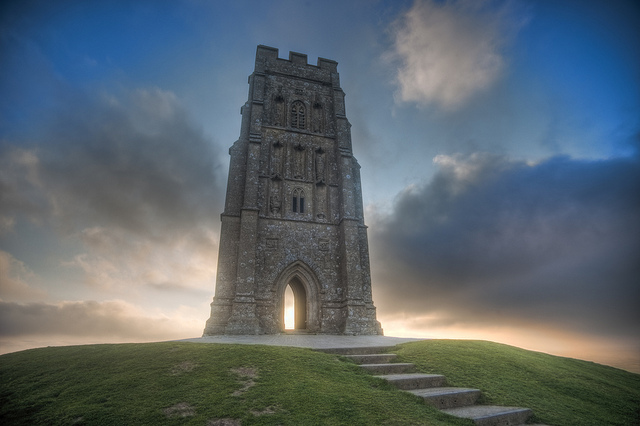 The roofless tower of the church of St Michael that is so vital a part of the modern visual image of the Tor is all that remains of a small medieval monastic community. Carvings of an angel overlooking the weighing of a soul on scales and of St Bridget milking a cow can still be discerned on it. An earthquake in 1275 had destroyed an earlier building. The site seems to have been abandoned following the Dissolution of the Monasteries and the terrible judicial murder of Abbot Whiting and his associates on the summit in 1539. 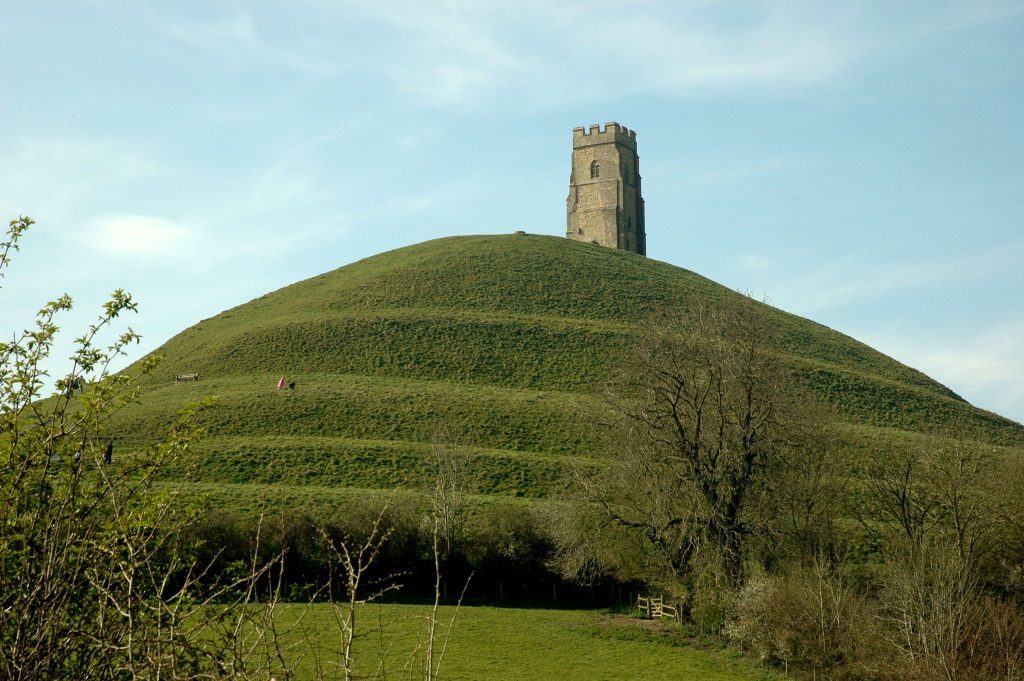 One of the most notable visual aspects of Glastonbury Tor is the terracing on its slopes. On a sunny day it can be distinctly delineated by the play of light and shadow. A generally held theory contends that it derives solely from medieval agricultural practices. In recent times others have come to feel differently. The occultist Dion Fortune, who had a home in Glastonbury between the wars, wondered if the hill might have been deliberately sculpted in remembrance of a prototype holy mountain on some other continent. She had Atlantis in mind but the general idea would prove to be fruitful in later speculations.

Mazes are most famously associated with Crete and the tale of the Minotaur. A particular maze pattern, known as “Cretan” and septenary in form, of which the Tintagel case is one example, can be found in many places around the world. 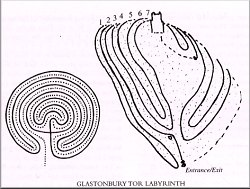 The most striking result of Geoffrey Russell’s journey of discovery was his theory that the Tor terracing is a unique three-dimensional form of the Cretan septenary labyrinth design. Russell linked his postulated Tor maze to a famous Welsh Dark Age tale, The Spoils of Annwn. It’s an early story of Arthur in which he and his companions go in search of a wonder-working cauldron that seems to be a precursor of the medieval Grail. One of the featured locations is Caer Sidi. This is taken to mean the turning or spiral castle. Russell believes this motif shows a memory of maze-threading ceremonials.  Somewhere in this mystery, the secret of the Grail waits to be revealed.

One aspect of the maze mystery helps to further expand our sense of Glastonbury’s uniqueness. We still have the impressive remains of Stonehenge and Avebury to ponder over. It is possible to speculate on what may have been done at such places, what they were for. Psychics can give evocative suggestions. Neo-pagan orders can perform ceremonies. A mystery always remains. With the Tor labyrinth there is much we don’t know but one thing seems certain. People would have walked its path. It seems that, in past times, the Tor may well have been largely covered in trees. The maze perhaps wove its uniquely three-dimensional path of gradual ascent through an enchanted wood. It would take a long time to walk it. The process would surely have induced an altered state of consciousness. This may well have been reinforced by ceremonial procedures presided over by the officiating site guardians. It has been plausibly speculated that there may have been a stone circle of some kind, or perhaps a large single standing stone, at the summit. The actual centre of the maze appears to be a large rock, generally known today as the “egg stone,” placed just below the summit. 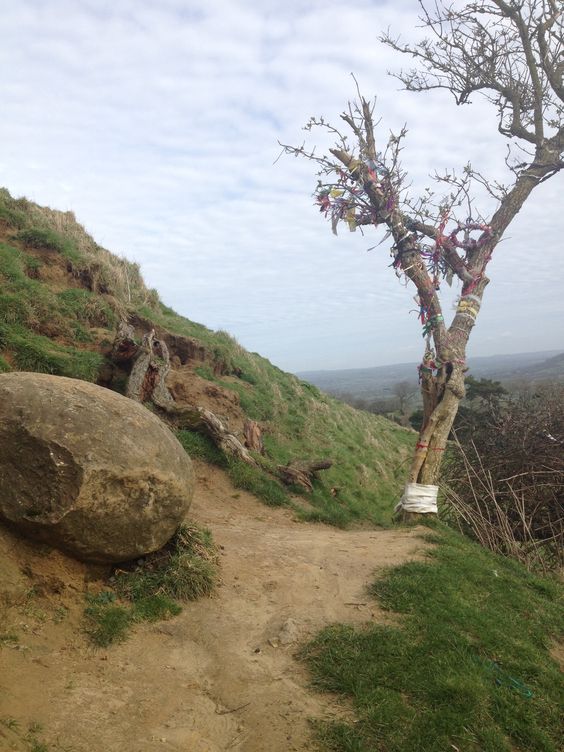 The entrance at the bottom is supposedly situated where two smaller stones lie. Various stages of the path could have been marked in a similar way. Some have felt that the destruction of the Tor church by an earthquake (not a lot of British churches have met such a fate), leaving today only a large upright structure that resembles, from a distance, some kind of megalithic obelisk, to be an expression of the mysterious hill’s personality, asserting its archaic and eternal predisposition. The totality of that numinous effect is lost to us. The trees and the megaliths are gone. The path remains though, and therefore can be walked again. Altered states may still be on offer. A glimpse of the mentalities of its creators could be possible.

The World’s Most Famous Leyline. 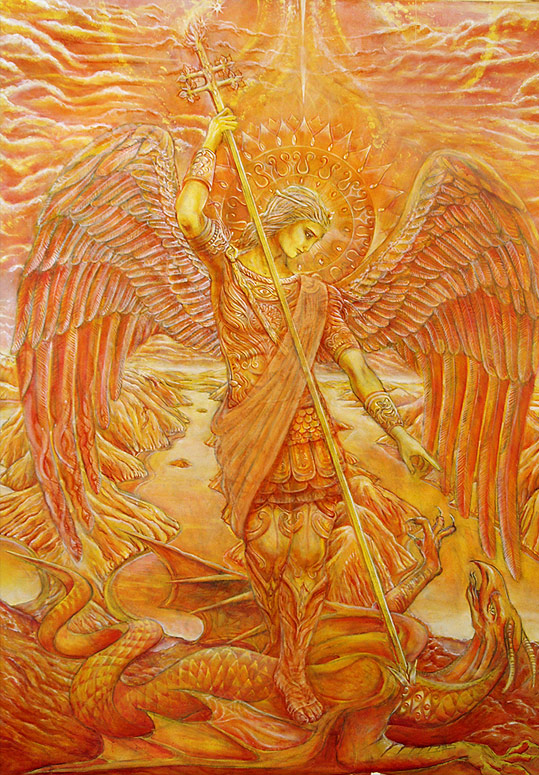 It is interesting to see how many churches dedicated to Michael are situated on hilltops. Glastonbury Tor is the obvious example. In The View Over Atlantis in 1969 John Michell presented probably his most important and enduring visionary insight: the idea of the Michael leyline.  He was struck by the similarity of Glastonbury Tor and a nearby far smaller hill at Burrowbridge, often known as Burrow Mump. 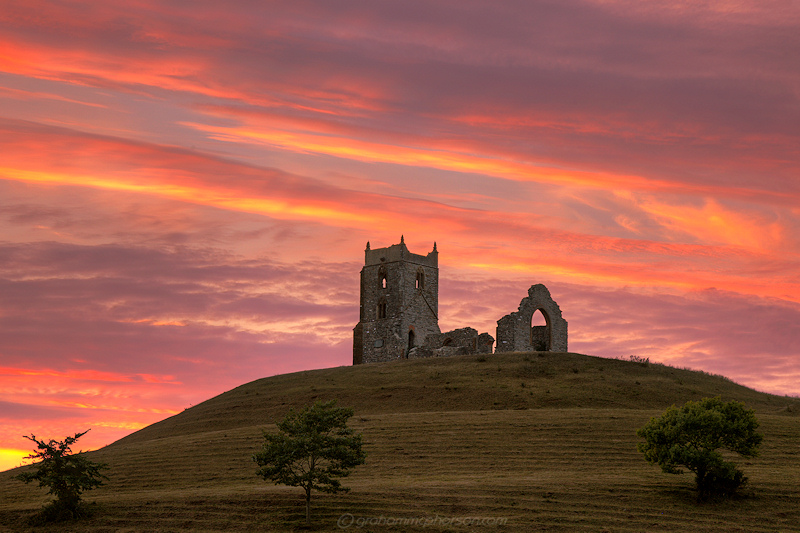 Both are topped by ruined churches dedicated to Michael. Both are similarly aligned.  Although referring to the alignment as ‘centred on Avebury’ he talks of it being ‘set’ between the two Somerset hills. The term suggests that the whole thing somehow spread outwards east and west across the country from a point of origin determined by the Tor and Mump. ‘Both these hills appear to have been artificially shaped so that their axis align with each other, and their orientation, 27 degrees north of east, can be read off a large Ordnance Survey sheet.’ These are wild ideas that no archaeologist would ever endorse.

From here he was led to note that a line connecting Tor and Mump could be extended westwards to St Michael’s Mount in Cornwall, through his churches at Brentor (which Michell states is about a mile off the alignment but near enough to make it noteworthy). 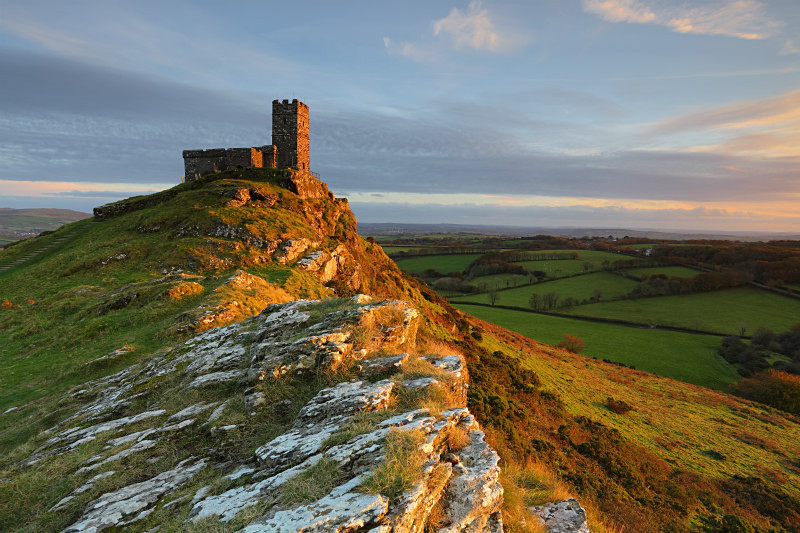 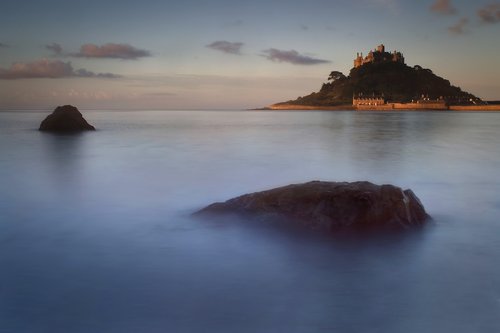 There are Michael sites to the east but the line most notably goes on through Avebury stone circle (a place already considered a serpent temple by some) and into Norfolk and the abbey at Bury St Edmunds. It travels across the longest continuous stretch of land in southern England.

Michael ley from The Sun and the Serpent by Miller and Broadhurst.

The suggestion is that the dragon force in the landscape was recognised by early Christians and certain esoterically-inclined church builders of the early Middle Ages. It became distorted until equated in the popular mind with the Devil. Michael was considered to be the ideal figure to keep these forces in check, due to his role in the Book of Revelation “War in Heaven”. The real nature of Michael’s relationship to the dragon force and what he himself may truly represent is an ongoing study.

Text adapted from Avalonian Aeon and The Michael Line, the Qabalah, and the The suggestion is that the dragon force in the landscape was recognised by early Christians and certain esoterically-inclined church builders of the early Middle Ages. It became distorted until equated in the popular mind with the Devil. Michael was considered to be the ideal figure to keep these forces in check, due to his role in the Book of Revelation “War in Heaven”. The real nature of Michael’s relationship to the dragon force and what he himself may truly represent is an ongoing study.

Text adapted from Avalonian Aeon and The Michael Line, the Qabalah, and the Tarot. 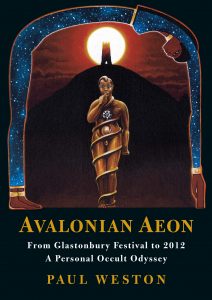 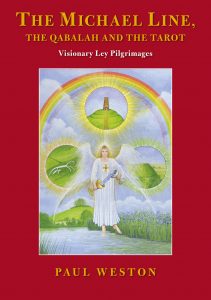