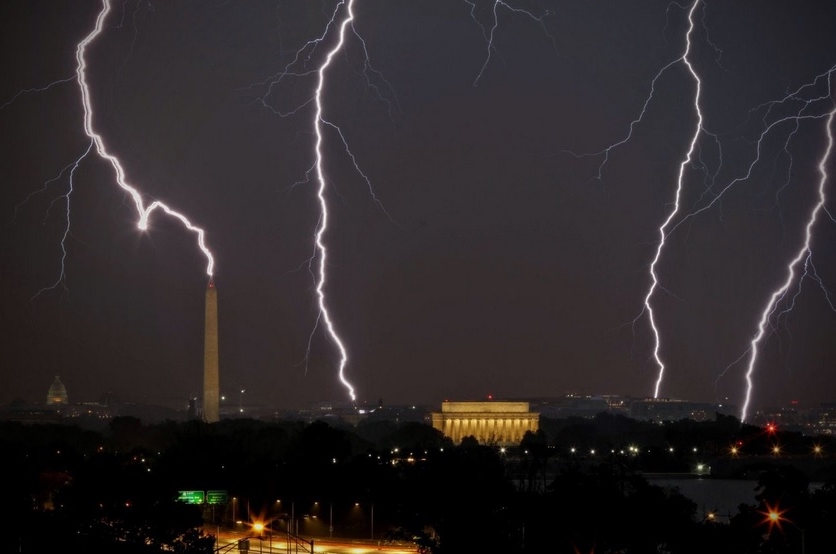 In my latest book History and Myth I mention the Roman worldview, of the importance of omens and those who interpreted them, and how it was expressed by the famous historian Livy. When seeing this remarkable photograph, taken by Anupam Anand and published in The Washington Post, and pondering current events,  I couldn’t help wondering how the Romans might have responded and whether we might learn something from it. The following has been extracted and adjusted from my book.

Jupiter was the great god of the Romans. A lightning bolt was a sign of his presence. On that basis, the behaviour of lightning was closely observed. A bolt that moved from left to right was fine. Right to left most definitely wasn’t. It spoke of his disapproval of current events. Whichever way it went, lightning required the magistrates of Rome to cancel all public assemblies on the following day.

A special class of omen was termed Monstrum, from which the word monster derives. The original sense of the word conveyed a warning being shown. They would be notable natural events that had a touch of the unusual or bizarre about them, something downright wrong. The birth of two-headed animals is a good example. The Roman Senate had to decide if some reported oddity warranted such categorisation. If it did, then the divinatory experts were called in to determine what action might be required. It might be that a neglected deity was in need of sacrifice and ceremony. I would venture to suggest that the fact that a National Guardsman was injured by one of the lightning strikes could be considered a monstrum warning.

This is my favourite example from Livy as it gives a comprehensive glimpse from the time of the wars with Carthage into a forgotten worldview.

‘Whilst the citizens were in a state of tense expectancy of a fresh war, the column erected on the Capitol during the Punic war by the colleague of Ser. Fulvius was shattered from top to bottom by a stroke of lightning. This accident was regarded as a portent and reported to the senate. The Keepers of the Sacred Books announced that the City must undergo a lustration; that intercessions and special prayers must be offered; and that animals of the larger size must be sacrificed both at Rome in the Capitol and in Campania at the Promontory of Minerva. Games were also, as soon as possible, to be celebrated for ten days in honour of Jupiter Optimus Maximus. Other incidents increased the religious terrors. It was reported that showers of blood had been falling for three days at Saturnia; an ass was foaled with three legs, and a bull with five cows had been destroyed by a single flash of lightning at Calatia; at Auximium there had been a shower of earth. In expiation of these portents, sacrifices were offered and special intercessions for one day, which was observed as a solemn holiday.’